BEYOND FULL SERVICE...A TRUE CONCIERGE APPROACH TO THE SALE OF CLASSIC AUTOMOBILES

For nearly 30 years, Classic Cars Ltd. has enjoyed an outstanding reputation for integrity and knowledge in the collector car field.  We are fortunate to have the continued support of long time customers, many of whom have become personal friends over the years.  Virtually all of our business comes from repeat or referral business and we often represent vehicles from the collections of our clients as they acquire new vehicle to satisfy their collector car “bucket list” of vehicles to own.  Whether it be an MGB or a Maserati, we remain passionate about classic cars and, at the end of the day, it is and always will been all about the cars, and their owners.

We are centrally located in beautiful Pleasanton, CA., the heart of the Livermore Wine Country, with access to Northern & Southern CA shipping ports to meet our customers’ global needs. We look forward to talking with you regarding your collector car needs.

Tripp’s passion for cars began with one of his earliest memories which involved Tripp, his dad and his dad’s 1960 Corvette.  Tripp fondly recalls driving across a bridge in Richmond, Virginia in the black 1960 Corvette convertible that his father had been rest 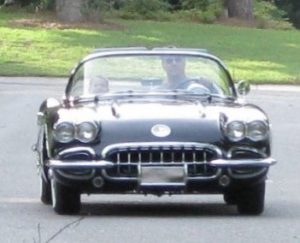 -oring. The emotion of enjoying something his father loved and the feeling of driving in a convertible with the top down accompanied by the soundtrack of Elton John’s “Bennie and the Jets” on the radio is an indelible memory that cemented Tripp’s enthusiasm for classic cars.

In high school in Connecticut, Tripp made “automotive education” a key part of his curriculum. Rather than follow the reading assignments for English class, Tripp instead read every Car & Driver, Road & Track, and Motor Trend he could get his hands on. He continued his education with his friends  gaining first-hand knowledge and experience by working on their own cars.  “Fix what you break” was his dad’s philosophy…so with their approach of “trial and error,” they kept busy.  Tripp must have done 25 brake jobs on his 1980 Honda Accord thanks to Napa’s lifetime warranty on pads (and not having the money to replace the rotors).

The summer between his freshman and sophomore year of high school, Tripp’s best friend’s dad took Tripp for a ride in his brand new car, a 1990 Porsche Carrera 4 5-speed.  This guy knew how to drive as he had done quite a bit of racing at Mid-Ohio back in the day and he made those Connecticut back roads seem like a winding black ribbon. Having experienced what it was like to drive the Porsche as it was meant to be driven, Tripp was hooked on cars even more than before.

After graduating from college in New England, work and family life took priority.  The interest in cars was still very much there, but unfortunately, time was not. A job transfer brought Tripp to California and in 2007, Tripp’s parents came out from the East Coast to visit. As they often did when they were together, Tripp and his dad made a point to visit many of the boutique car shops in Northern California. During one of these visits, Tripp and his dad walked into Classic Cars Ltd. where they met Paul. Impressed with the quality of Paul’s collection of cars, his professionalism, and the way he marketed and sold his vehicles, Tripp and his dad became one of Paul’s many loyal customers and added a restored ‘57 Chevy to their car collection. Tripp and Paul hit it off and that began a 13-year relationship of “stop-ins”, “tire-kicking” and sharing stories and insights about cars.

After over 20 years of working for various hi-tech companies in North Carolina and Northern California, Tripp decided it was time to make his passion his work. During one of their “tire-kicking” conversations Tripp and Paul discussed the possibility of Tripp taking over management of Classic Cars Ltd. After many thoughtful conversations Tripp decided to pursue his dream and bought Classic Cars Ltd. from Paul in January 2020. Tripp has enjoyed meeting and working with the many existing and new Classic Cars customers. Being able to share his passion for cars with others is a dream come true.

When not at the store, you will find Tripp spending time with his family and their Rhodesian Ridgeback, Lola. Born and raised in Chicago, Paul’s interest in automobiles began early with an experience that left an indelible mark on the impressionable teenager. In possession of only a learner’s permit “Uncle Marty” allowed him to drive his 1963 Jaguar XKE Series I.  A worldwide traveler and avid British car enthusiast, Marty would later acquire a Lotus Europa, Austin Chummy, 1929 Rolls Royce Phantom II, and others, all of which Paul had an opportunity to drive on the twisty roads around Chicago’s North Shore.  By age 15 ½ he acquired and was restoring his first car, a 1963 Corvair convertible that was finished on his 16th birthday, the day he received his driver’s license.

Paul developed an appreciation of sports cars that offer an excellent power to weight ratio, superb handling, and a high fun to drive quotient in addition to being exposed to his “big sister’s” friends’ hot rods and muscle cars that were prevalent in Chicago during the 1960’s.   To further cement his interest in all things automotive, a close relative was active in sports car racing at Illinois & Wisconsin race tracks where Paul found himself helping (or getting in the way, depending on your point of view) with the preparation of racing sports cars.  By the time he was out of high school he was totally hooked and there would be no turning back on a lifelong interest in cars.

Paul received his B.A. in Business Administration at Lakeland University, located just a few miles from Elkhart Lake, home of Road America.  “Elkhart” provided an opportunity to attend the races as a spectator and, for the first time, spend time on the race track in a wide range of sports and sporting sedans at his “home” track of Road America and other nearby Wisconsin race circuits.

In 1980, Paul accepted a corporate transfer to the San Francisco Bay area with increased management and national sales responsibilities for a major corporation.  California offered the perfect climate, not only for accumulating a personal collection of specialty vehicles, and for increased racing activities, and Paul took full advantage of both opportunities.  He spent time honing his skills at racing schools in the United States and Canada accumulating significant time on the track in Formula cars and European sports cars.  He was invited to drive the Mercedes SLS AMG at the USA release on Laguna Seca race track, Monterey, CA.   During this time, Paul also completed several “frame-off” restorations  on several British vehicles, including a Lotus Elan Sprint, Mini Cooper “S”, and several Austin Healey “Bugeye” Sprites.

In 1993, having left corporate life behind to follow his lifelong passion, Paul founded Classic Cars Ltd. in Pleasanton, CA.  25 years later, Classic Cars Ltd. has become international in scope but remains in its original small town location in Pleasanton, Ca., and under his uninterrupted ownership.  Turning his vision into reality, he has had the pleasure of dealing with customers across the globe, making long standing friendships along the way.  The business model that began in 1993 remains unchanged with the goal of providing high quality California sports, high performance and specialty vehicles to buyers around the globe and providing what Paul refers to as “Beyond Full Service…a true concierge approach to the sale of classic automobiles.”

Paul’s travels have taken him around the world to meet with clients and attend F1 races, and Motorsports events, including Goodwood, Monaco, and other international gatherings. His personal vehicles have been featured in multiple international automotive publications and received recognition at car shows  and Concourse events.   Classic Cars Ltd. has received global recognition including featured articles on its vehicles, and was highlighted on a segment of the TV series, Car Hunters.

A lifelong active animal advocate, Paul has held Board of Director positions with the local humane society and has been involved with AKC (American Kennel Club) certified therapy dogs for over 10 years.  Paul and his canine companions have organized and attended bereavement camps for kids, provided services to special needs children, Veterans, and others who benefit from the unconditional love that a canine provides.